Home is wherever I’m with you.

It’s been a while, sorry about that! A lot of stuff has happened, and I can’t wait to share it with you. If you watch my streams, you’ll already know all the details, but if you don’t, I’ll be catching you up over the next few posts.

Firstly: We got a house. We’ve been living in it for a few months and it is not without its challenges, but this is a big bucket list item for us both. It needed a little bit of work but it’s situated in a marvelous neighborhood and close to work and shopping, which is a massive plus. The internet situation isn’t as great as inner city apartment life, but I can’t say I’ve noticed too much of a difference thankfully. I made this dress to go househunting in, and it seems to have brought me a little luck. The fabric was purchased from Spotlight and is from the Studio E Fabrics range from several years back. I still wish I had bought more! I had to do some tricky piecing to get the pattern to match up at the back and the houses to repeat around the pleats in the skirt. I had a gathered skirt at first but decided that the repetitive house pattern worked for box pleats much better. As per usual, it’s a self-drafted pattern. This was from the earlier days of my sloper so the fit wasn’t absolutely spot-on, but I’m still happy with it. It’s just a bit pinchy in the armpits and just a touch too high in the neck with the addition of the piping. But how could I leave it out?? The striped piping adds just the perfect touch to this kooky birdhouse dress. I’m finding more and more situations to use the striped piping and I should honestly make my own since this stuff fades rather quickly (I didn’t buy it from the best source). I also have some similar red striped piping that I have to remember to wash at some point because I remember the last time I handled it, I had a lot of red ink coming off on my hands. Eek! 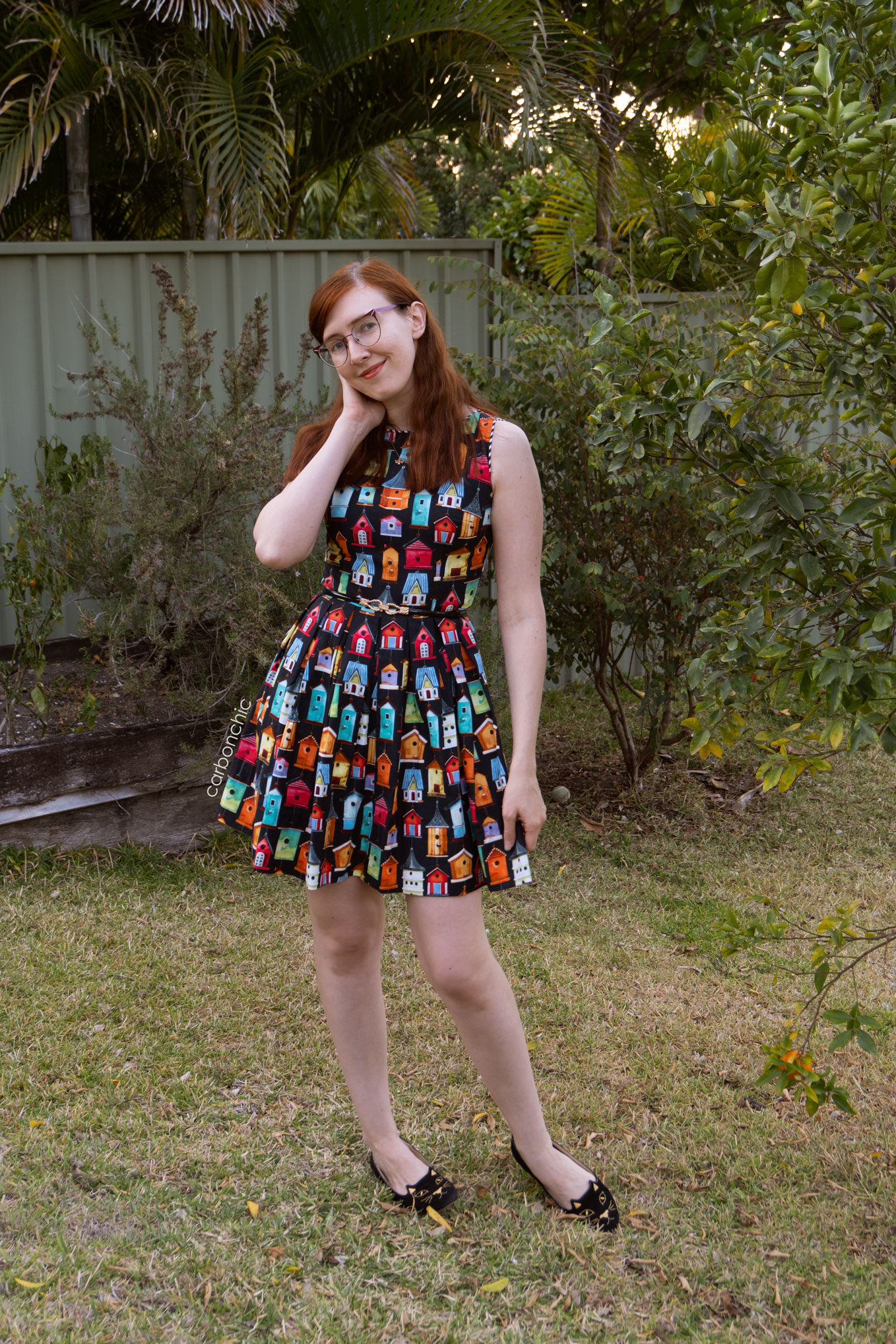 I’m not hugely happy with the length but you have to admit, it definitely shows off the gams! There’s a lot of hem in there I can let down if I’m ever in the mood, but it’s a nice Summer dress. Australia is really getting warmer a lot faster which concerns me a little bit but at least I have a lot of sun dress fabric in my closet?

I don’t often put a lot of darts into my dresses because the way my sloper is drafted, the darts are usually quite large, but this dress really called for them as a necessity. It took more finagling than people probably realise to get the front piece cut out in the right place. Behind every pretty dress you, dear reader, might see on this blog, there’s always an enormous amount of effort tetris-ing the fabric in a way that sacrifices neither an excessive amount of fabric nor should it sacrifice pattern placement. The best I could do here was centred through some bird houses in the front. I’m actually really proud of that. I scooted the darts over a very, very small amount to get this to work. The houses almost look uninterrupted on the front, which is something I really aimed for with this design. And of course darts–even though they’re large, they really have to be sewn properly to stop them from puckering at the tips. Sewing the last centimetre of a dart just parallel to the edge helps with the bubbly Madonna look that we are all trying to avoid.

Another big piece of news before I go–I’m not working in the city anymore! I escaped a super toxic environment that was destroying my mental health and am so much happier where I am now, even if it’s not as a graphic designer anymore. But more on that later ;) It’s good to be back.