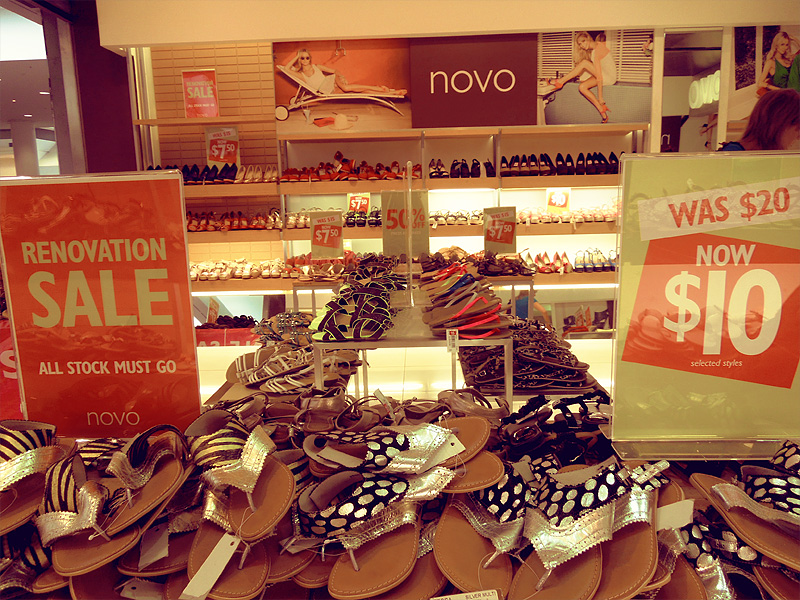 If you’re in the neighborhood at Westfield Carindale any time soon, make sure you drop in at Novo shoes before they’ve finished renovating. No matter what budget you’re working with, there’s something in this store for you.

If you’re okay with synthetic shoes and you’re a frequent shopper at shoe stores like Rubi, no doubt you’ll be pleasantly surprised by the stock you’ll find here. While the majority of stuff is made from a synthetic base, some shoes (often with the “leather” symbol etched into the insole) have leather linings, and sometimes, if you’re really lucky, you’ll score like I did when I went in there yesterday. I don’t want to brag (okay, I kinda do), but I found these shoes at the front of the store in the pile to the left buried under a mountain of pleather. If you’re particularly observant, you’ll see another pair peeking out of the pile in the second image of this post. Even as a first-class frugalista, I gotta tell you, it’s not often that you score a pair of cherry-red patent flats in your size with leather uppers and linings for $7.50. There’s two more left, in a size 8 and a size 6, for anyone who was looking for a nice little Winter staple.

They must have at least 100 different styles of shoes in there. From flats to heels to sandals to espadrilles to wedges to stilettos to chunky heels to thongs to those hideous sneaker wedges I was talking about in a previous post (try saying that five times out loud). While nothing particularly piqued my interest asides from these flats and maybe a gorgeous pair of rose gold stilettos for the same price (but seriously, what does one even wear with rose gold shoes??), I’m considering dropping by again sometime soon to see if they’ve rotated any new stock in. The sale has been going on for a while and they seem to be discounting frequently and bringing more styles in as time goes on, so it’s definitely something to keep your eye on.

Normally, I wouldn’t be promoting these guys because of the dreadful state of the last shoes I bought from them after four wears (those bow-topped shoes from one of my lookbook posts? The heels on those shoes are obliterated after some mild walking, I don’t think I could have damaged them more if they were made out of cheddar cheese), but these sales defy all common sense. No doubt they buy from a foreign wholesaler and I’ve heard good things about them in the past, so I’m putting down my mistake of a purchase as an error in judgement as far as that’s concerned, but not a good enough reason to write off the entire brand.

Besides that, with shoes starting from $5, what have you got to lose, really?

Let The Sunshine In