What can I say about this dress? It was another one of those “easy win” type projects that sort of spiralled out of control at the finishing line. Ever true to my blog’s name, I copied the concept from a true vintage dress sold by Dear Golden way back in the day: 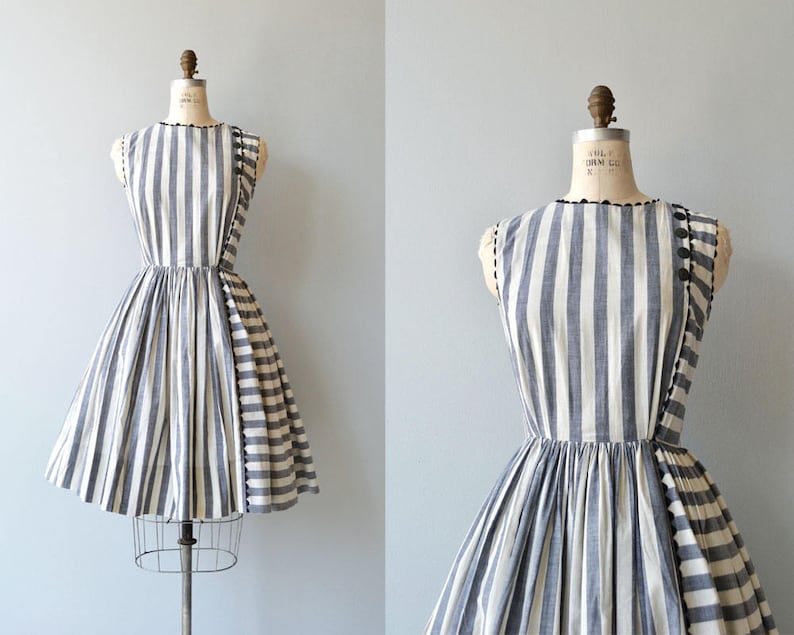 I was going to do ricrac, I honestly was, but this dress happened to have cream stripes and I only happened to have bright white ricrac. Ostensibly, it’s a cardinal sin to mismatch your trim even a little bit to your fabric, so I couldn’t go down that path, and tea dying polyester is a risk at the best of times. I will eventually redo this dress (I mean, I have the pattern for it now) though perhaps not in upholstery fabric. 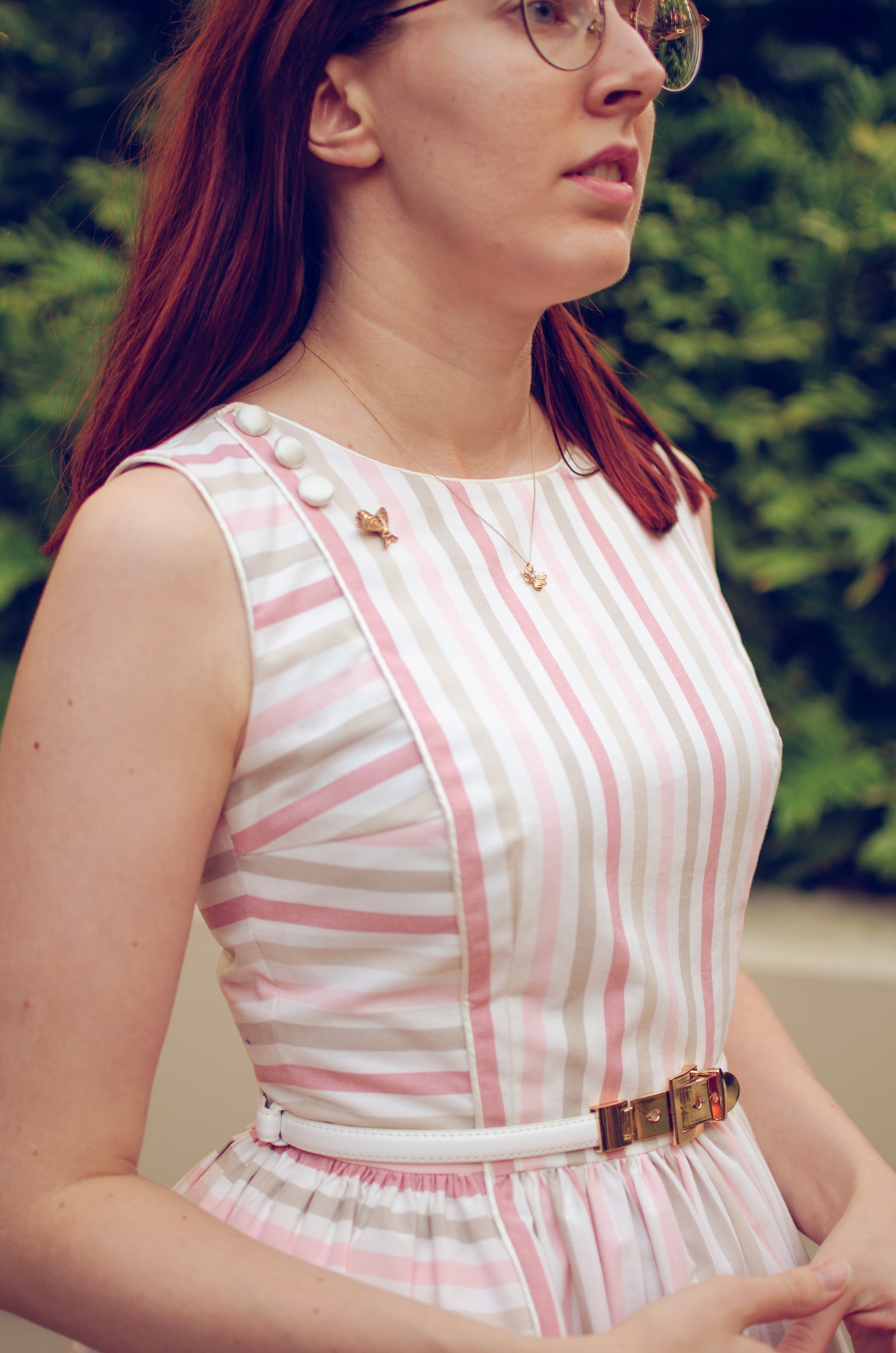 I had some cream piping laying around, so off I went! I even deconstructed the piping so I could cover some buttons. I should have put another one to stay true to the inspiration image a little one, but I’ve always heard that an odd number of buttons looks best. Who made that rule up? In case you couldn’t tell, I went pretty hardcore on the pattern matching. You’d think that perpendicular stripes would require less pattern matching, but I had to think about dart angles and patternmatching the side seam and where the skirt met the bodice so I could have that dark pink stripe running from my shoulder to knees. I even pattern-matched the pockets, not that anyone will notice or care. You’re probably thinking that this is some super wasted effort on my behalf, but the truth was I only had a few little pieces of fabric left over after I cut out the bodice and skirt, and the fabric left for this pocket in particular happened to line up with the skirt. Before you ask, yes, the other pocket has vertical stripes. The back was a struggle. It truly was. So there’s a reason why patterns ask you to put certain pieces on the grain and others on the crossgrain. One of them (I forget which but I think the crossgrain) has slightly more stretch than the other. So despite interfacing the crap out of my lapped zipper, one side is slightly longer than the other, not that anyone would know except you, dear reader, because I just told you (dammit). I also should have made the skirt a few inches less full and matched that dark pink stripe down but I was an idiot. Nevertheless, I am really proud of my lapped zipper. I stitched the zip in right along the edge of one of the stripes and the lap is even piped, so it looks basically imperceptible. One last issue with this dress and my last learning were problems caused by the nature of the fabric. It’s upholstery fabric from Ikea that I bought aeons ago. Upholstery fabric is good if you want your dress to hold its poofy shape and never sag on you, but it’s not a dart-friendly fabric. You may or may not have noticed in these pictures that my left dart is super duper conspicuous. Yes, I notice it too. Constantly. I must have pressed that bastard 30 times with the heat cranked all the way up, left the iron on it for 20 seconds at a time, but the dart just. Would. Not. Press. What I probably should have done was a balanced dart or snipped the entire thing open and pressed it flat, but that’s a lesson for another dress (and I have a lot of upholstery fabric in my stash to go). 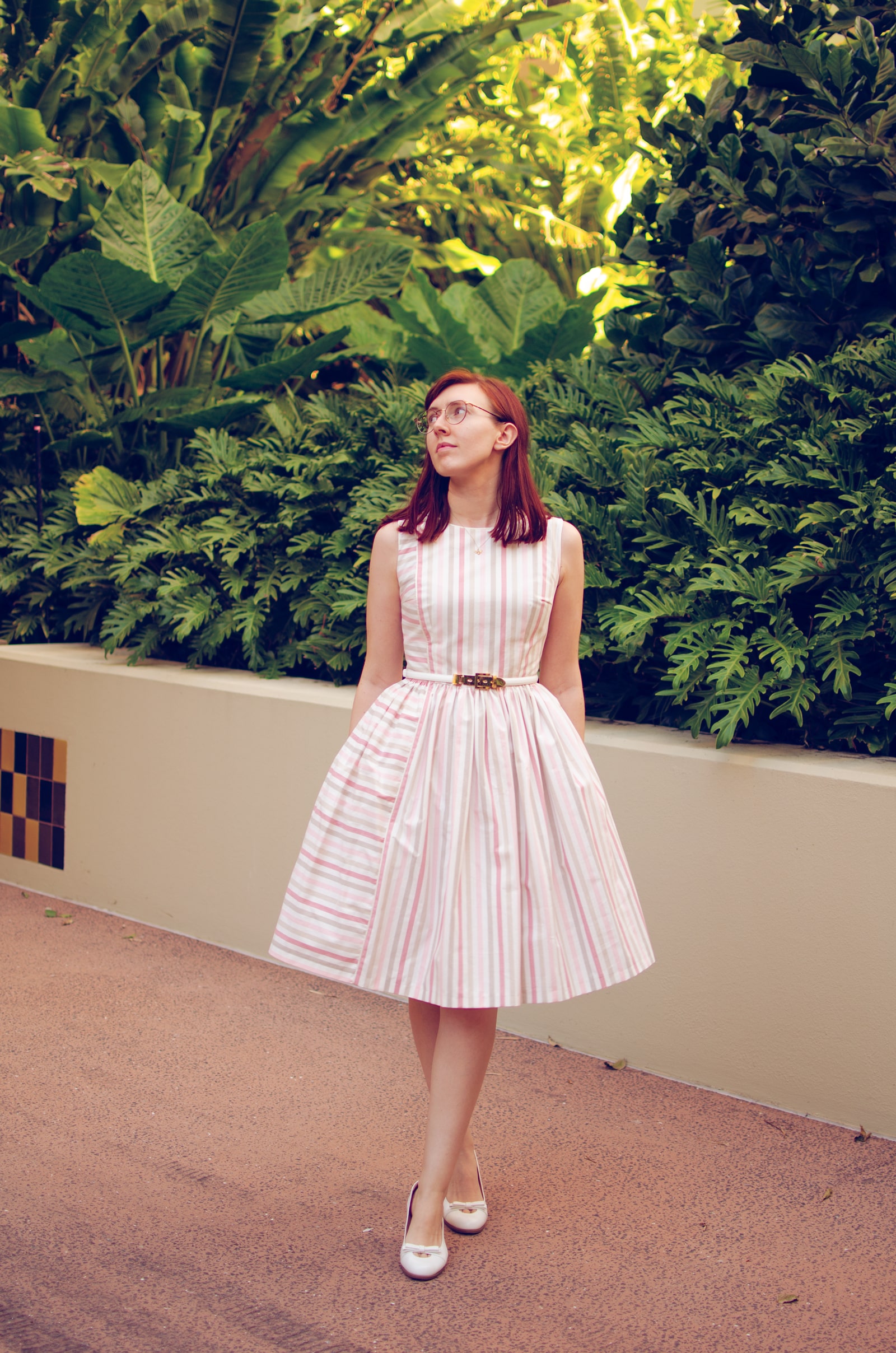 Despite the trials and tribulations, I’m fairly satisfied with how this dress turned out, and I can tick off one of my dream dresses on Pinterest (only 35,487 to go).