We can all feel a little bit blue sometimes. Some of us seemingly feel it harder than others. Whether you’re blue in the clinical sense or not, most people can empathize! Over the last few months, I feel like it’s been hitting me particularly hard and that’s why it’s been so hard to keep up with this blog. Who knows if anyone is still reading it anyways? I mean, I hope someone is still reading. At some level I do like sharing my work online. Nothing makes you feel more powerful than sharing a skill you enjoy both enjoy and excel in with others, especially if they also share those traits! I guess that’s why I’m here. It doesn’t completely take away the blue, but here’s hoping the medication will solve part of that equation. It’s helping a little bit, at least. I am certainly very productive, even if the blog doesn’t have anything to show for it. This is a dress I made almost directly after the previous post, having suddenly grown an obsession with buttons and the automatic buttonhole feature on my modern Janome. That belt was something else. I was dissatisfied with tutorials on the web on how to create these covered buckles because it left raw fabric at the corners where you had to snip in to fold it into the corner so I devised my own method. I really have to start documenting this stuff. 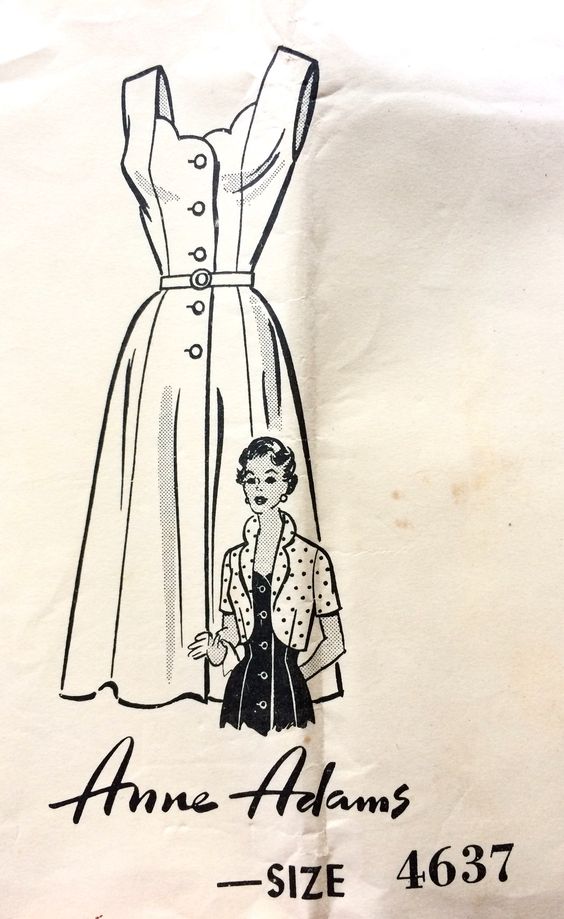 Despite having made this entire dress out of fabric which I believe was supposed to be cotton quilt backing, it’s still definitely one of my favorites. I created it like a sort of jumper dress to wear on blouses but as I took these photos in Summer (yes I know I’m late), I didn’t wear anything underneath this time.

My ex-boyfriend actually bought this 1950s Anne Adams pattern this dress was based on for me, several years ago, before I even thought about pattern drafting for myself. If I knew anything about drafting back then, I would not have coveted it so blindly over the scallops!

It was in face a terribly simple dress to draft. Looking at the diagram, you can see it is a simple waist-to-shoulder princess seam where the neckline has been cut away to the princess seam. Lining it was an interesting experience because of the neckline but by no means was it difficult.

I used some tuna cans to draw the scallops along the neck. Somehow I think the diagram’s scallops turned out nicer but alas, diagrams don’t always perfectly translate. I would say my favorite deviation away from the pattern was the way I made the opening down the front. Of course to have the buttons end at around crotch height, it would have been super impractical to have the lower part of the dress open and free to flap in the breeze. So at the bottom of the buttons, hidden away, is an ingenious little upside-down kickpleat! If you’re finding it hard to imagine, take any skirt you own that has an overlapping kickpleat and turn it upside down and imagine it with buttons on one side and buttonholes on the other. Pretty clever, huh? Add a simple 3/4 gored circle skirt and you have yourself a winner! As you can see in the above photo, I hemmed it using a bias facing. It’s not a great match in color but you don’t particularly ever get to see it, so I’m not too worried.

On another note, I never thought a backward sweetheart neckline would be flattering but I tried to copy the pattern as best as I could. It doesn’t look as goofy as I thought it would! You may have noticed the dogs milling around in the background. They’re doing very well, if you’re wondering! Evie just had a tooth removed and she will need further surgery soon to remove a precancerous lump of sorts so we aren’t really looking forward to that, but on the whole, they’re both happy and healthy. Hugo will be 12 next month. Can you believe it?? Regardless of his physical age, he will always be my little baby. Anyways, if you’re still out there, thank you for reading!